Tom Ferrero | On Reflection
I started my career as a jeweler and metal artist. The precise nature and regimented procedures inherent in that occupation are what prompted me to start painting. I wanted to work larger, use more color and be more spontaneous. I start off all my paintings with a brightly colored canvas. From there I sketch in the image with charcoal then plot out the dark and light values before mixing the colors and weaving them into the work. Most of the subjects for my paintings are sourced from my own life and photographs around the state. I feel like Maine itself deserves some of the credit for the work I produce as it continuously provides the inspiration for nearly all the pieces. The images are often contemplative and elicit feelings of serenity for me. While my work may be described as realism, the realistic quality is not what excites me, rather, it’s the coming together of the many separate brush strokes to form the overall image that I find so satisfying. Up close I’m interested in the abstract quality the work takes on, the variety of shapes and how colors play off each other. From a distance it’s the mood that each painting evokes. This small collection of work titled “On Reflection,” will hopefully speak to you as much as it does to me.

About the Artist
Tom Ferrero is a metal artist, fine art painter, and instructor based in Central Maine. He received his undergraduate degree in Metal Craft and Jewelry Design from Rochester Institute of Technology, followed by a Post Graduate Diploma as a United States Fulbright Scholar in New Zealand through the University of Auckland at Manukau Institute of Technology, and completed his education and MFA at Indiana University. He taught 3D Foundations at Indiana University while in graduate school, followed by six years as a metal artist and jewelry professor at NSCAD University in Nova Scotia. In 2016 he moved to Maine year-round where he works as an independent artist and part-time art instructor for Maranacook Community High School, and is also an occasional part-time Lecturer for the University of Maine at Augusta. Ferrero has been invited to lecture at a variety of colleges in the US and Canada and has given workshops in both countries to adolescents and adults. He is a recipient of a United States FULBRIGHT grant and is a two time, 1st Place, NICHE AWARD winner as well as a 1st place winner in the International SAUL BELL DESIGN competition. In 2019, Ferrero was presented with the Maine Craft Artist Award by the Maine Crafts Association. Tomferrerostudio.com

Visit the Center for Maine Craft 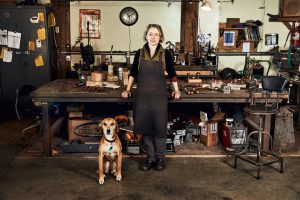