Portland-based studio potter, Ayumi Horie, has worked on various projects including Portland Brick, The Democratic Cup, Pots In Action, Handmade For Japan and Obamaware. She’s currently Vice President of the Board of Haystack Mountain School of Crafts.

What Maine Craft Means to Me

Yesterday I received  an email from someone saying that although he liked my pots, he didn’t like that I was cramming politics down his throat with propaganda. He was talking about a new risograph of mine that features three ostraka with a bold VOTE OUT laid over them. The print is a smart-aleck take on an obscure bit of ceramic history. Ancient Athenians exercised a form of democracy that involved scratching the names of leaders who had become too powerful or who were verging into tyrannical territory into pottery shards called ostraka. If any name received more than 6,000 votes, the person was ostracized for ten years. Some 2,500 years later, I scratched in Trump, McConnell, and Collins’ names into some bone-dry shards in the hopes that we could employ craft as effective political action, or at least pretend to. 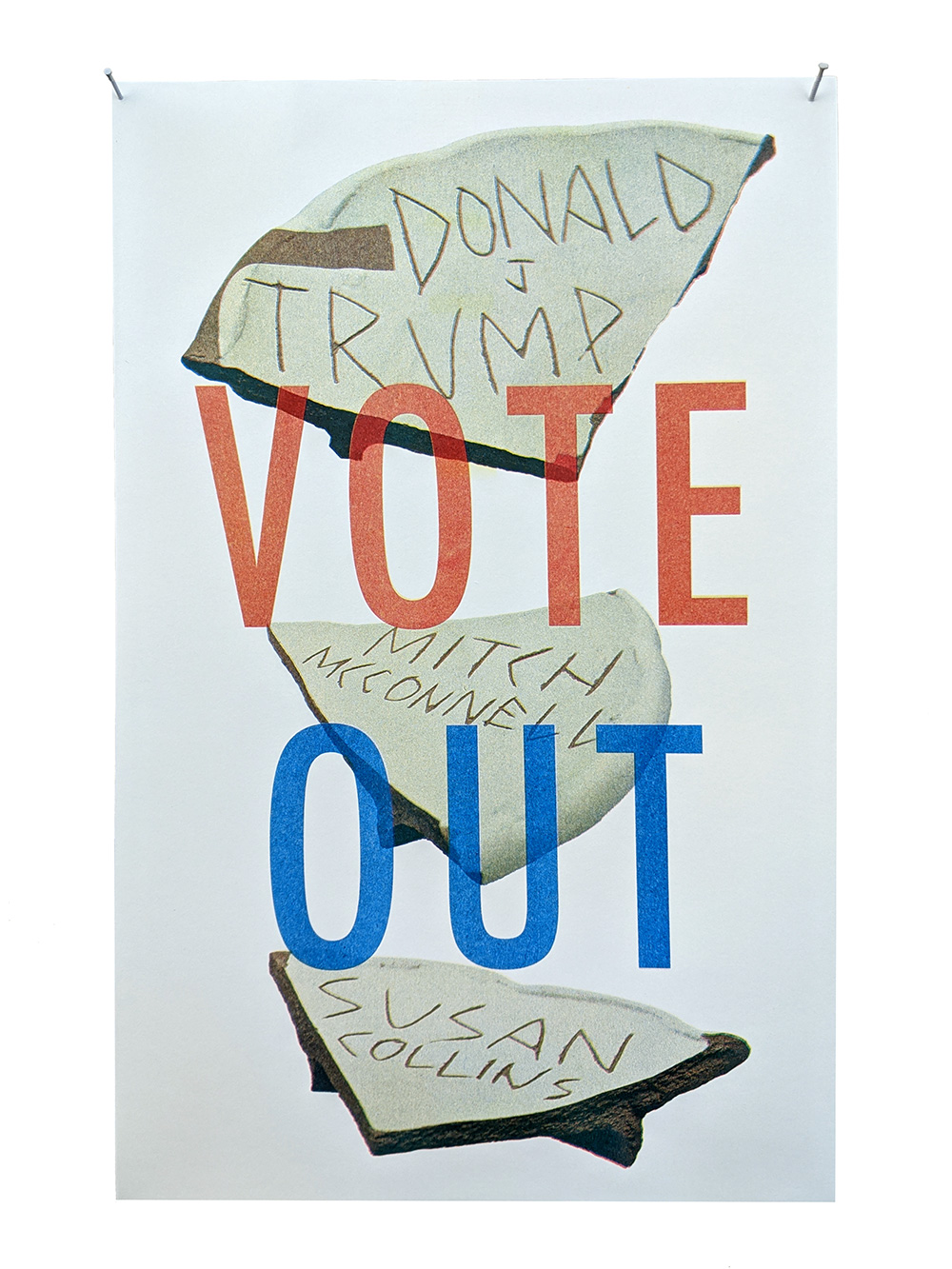 Two hundred years after Maine’s statehood was granted in 1820, we are in the midst of a global pandemic that is driving people back into their homes. We are making handmade objects at home, much in the same way that white settlers made objects to supplement their farming and fishing incomes in centuries before and many Indigenous peoples have continued to do so since colonization. When people have no governmental safety net, they turn to their hands to make, whether it is born out of tradition, self-expression or economic desperation. In Maine, our notions of craft are often grounded in material objects and history. However, we have not yet fully reckoned with our colonial past or rethought our identity, which is bound to stereotypes of whiteness, wrapped in plaid. As our communities diversify, so too should our definitions of craft, because object making is universal and Maine’s brand should never have been tied solely to whiteness in the first place.

As a child of the 1970 and 80s craft scene in Maine, I believe that it’s well past time to rethink the complicated histories of our studio practices. For example, the modern American studio pottery movement was founded on the colonial mentality of an Englishman who believed that since Americans were “too multicultural” and did not have a long enough cultural “taproot”, that they should selectively borrow cultural references and ideas from Japanese and Chinese culture. What are the implications for Maine potters, many of whom were educated in this school of thought, all of whom live on unceded Wabanaki land, including me?

Whereas propaganda is by definition steeped in misinformation, craft can be a form of radical truth-telling, something we need now more than ever as a means to counteract age-old assumptions and stereotypes. Handmade objects hold power and, together with the stories that accompany them, they can drive change, both slow and fast. For me, it’s impossible to separate my identity out from my work. Being a gay biracial Japanese American mother is unavoidably political at a time when courts are backtracking on civil rights and we have a President who promotes conspiracy theories, engages in voter suppression, and incites violence. My values are embedded in everything I make. I hope that because I draw from multiple experiences, I help make my community richer.

As much as anyone, I believe in beautiful, functional pots that work their comforting magic in a kitchen. They can be a balm to pain so that we can endure the rest of the hard things in life. They’re enough in their own right, yet in this time of racial reckoning, we also need a public craft, a civic craft, a craft that is mad as hell about inequities that are growing worse by the day.

The maker community in Maine is generous and caring; many have produced masks and organizations like Haystack have printed thousands of PPE for local organizations. How can more Maine craftspeople use their skills to strengthen community and bolster democracy by getting out the vote? What is our civic and social responsibility as makers? How can the systems within our craft organizations be inclusive and equitable, so they begin to repair the damage done to creative Indigenous, Black and communities of color? How do we look at everything from application processes to governance practices to fundraising so that our craft organizations become truth-telling systems for all people, not just privileged ones? With school budgets under such strain, how do we protect the value of art education so that K-12 kids- BIPOC and LGBTQ+in particular, have continued access to art as a problem solving tool, a mode of expression and a celebration of identity?

I am unapologetic about how infused my work is with my progressive values. Craft is made with the whole being. Now is the time for each of us makers in Maine to reinvest in our communities, re-examine our legacies, and consider craft as action, so that we can transform our systems into ones that are truth-telling and just for everyone.

Donate Now
What Maine Craft Means to Me Essay Series

What Maine Craft Means to Me Essay Series invites you to explore the many intersections and layers of craft, people and time in Maine through the words of those with deep connections to our state and our field.

The Maine Crafts Association is a 501(c)(3) non-profit arts organization supporting craft artists by providing educational, marketing and retail opportunities. Our ability to accomplish our mission and help artists thrive is reliant on individual contributions.