Every corner of Maine is home to folklore. We are a state of storytellers, of imaginative souls that embrace the tales passed down for generations. We each have favorite stories and characters- some entirely fictional, some entirely real, and others somewhere in the gray area. As is the case with tall-tales surrounding the wide eyed Baron Jean-Vincent de St. Castin, seen front and center on the Maine Saucery’s bottles of Baron’s Blaze.

When Robert Brouillard took on the production and distribution of Baron’s Blaze, a decadent, one of a kind, sweet-spicy peach-based hot sauce made in Castine, he and his business partner extrapolated from the original story about Castine’s own treasure-hoarding Baron to add some mystique to their marketing.

“The Baron Jean-Vincent de St. Castin was a secretive Saucerer. The leader of an underground society in France solely dedicated to the conjuring of fine sauces, his expertise sprang from his love of exotic spices and peppers. Famous for having the most magnificent of succulent sauce recipes, with an aroma that could leave a man dazed and the taste couldn’t be topped. In 1666 the Baron was unfortunately ousted from the League of Saucerers, after one of his sauce pots exploded, macing nearly half the town…”

Though the Baron’s Blaze recipe was concocted by Robert’s father and neighbor as a hobby that was sold on Sugarloaf mountain and became a favorite in local-to-Castine shops, the website implies that this recipe is older than you think; and the product has gone through recent shape-shifting thanks to the vision of Robert and his team for the perfect hot sauce.

After graduating from UMaine, Robert purchased the company with a friend in 2015, rebranded the business, and reworked the recipe. The product is manufactured in Castine, and the company’s office and distribution space is located in Portland. Currently, Baron’s Blaze is distributed to multiple states from Maine to California and sends approximately 20-30 cases per month to storefronts and happy tables.

Story-telling may be one of our main talents here in the state of Maine, but the deliciousness of this product is definitely not far-fetched. Baron’s Blaze is sweet with a mild punch- ideal for topping eggs, steak, oysters, potato salad, and any other food you could want to add a little kick to! You can find this Maine-made hot sauce at Center for Maine Craft, as well as other local-to-you locations. 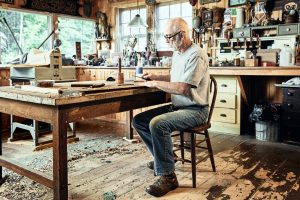