In a home studio in Vienna, Maine, a small town in the northwestern corner of Kennebec County, Hillary Hutton designs and produces unique, fine quality woven rag rugs made from hand-dyed Egyptian cotton warp, paired with new and repurposed cotton blend fabrics. Her rugs range in size from as small as 18-inches wide to large, luxurious floor coverings of 10-feet by 15-feet, or runners up to 22-feet in length.

Hillary’s history in the world of Maine fine craft is a long and wonderful one. She was an early member of the Maine Craft Association (MCA), as well as the Maine Crafts Guild(MCG) where she once served as president, and now has a seat on the MCA/MCG transition team helping with the joining of the two organizations for 2020. Hillary is also a 2017 program alumni of the MCA’s mentor booth program for the Craft Boston show.

Continuing her relationship with the MCA, Hillary will be one of our first Guild Level Members, a new juried membership level for the MCA’s 2020 membership season. We are excited that her exquisite, one-of-a-kind rag rugs will be a part of the Center for Maine Craft’s Dirigo Maine Bicentennial exhibit in early spring of 2020, showcasing Maine’s traditional fine craft legacy.

When did you begin weaving?
I went to Mass College of Art in the late 70’s where I learned weaving. In 1981 we moved to Friendship Maine where I began designing and weaving a line of women’s clothing that I sold to boutiques and galleries in the Boston area. In the late 80’s I began selling at craft events. In the early 2000’s I began to move away from the production weaving of garments to one-of-a-kind rag rugs. Today I am weaving rugs exclusively.

What is your favorite material to work with?
I prefer cotton for the great range of color and it’s receptivity to dye. My warp yarn is an Egyptian cotton that I purchase white and hand dye with procion dyes.

Who are your most memorable mentors/teachers?
Don Talbot was the mentor who helped me research and design the catalonge that I am entering into the Dirigo exhibit. Catalonge’s are a French Canadian tradition of blanket weaving. This tradition was brought to the Lewiston area by the Canadians who came to work in the Lewiston Mills.

Do you participate in any annual fine craft shows?
Yes, I am a member of the Maine Crafts Guild , Maine Craft Assoc. and the League of NH Craftsmen, attending the shows that they sponsor. I also have been an exhibitor at the Common Ground Country Fair for over 30 years.

What (if any) are your future plans for your business?
My plans are to leave the retail shows behind and replace them with representation in Galleries.

What is your favorite aspect of your studio/creative space?
I have a studio in my home.

How/when did you first learn about the MCA?
I was an early member of MCA and let that membership lapse until recently. I re-joined about five years ago and plan on moving into the Guild level membership that will be available in 2020.

Learn more about Hillary Hutton and her distinctive craft at her website; and view a selection of her handwoven rag rugs at Maine Craft Portland. 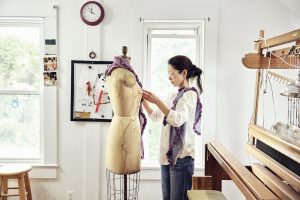